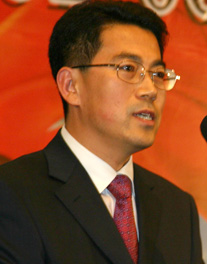 Year 2008 is an unforgettable year, when China hosted Olympic Games, financial crisis occurred and China’s opening-up and reform policy has been adopted for 30 years. At this critical period, ShippingChina.com organizes this conference to retrospect the past history and speculate bright future.

Here I will give my thanks to Mr. Ye Jian, who has enlightened me by his idea “Human civilization and economy are closely related with water”.

To celebrate the 30 Years Anniversary of China’s adoption of opening-up and reform policy and welcome the upcoming 60th birthday of new China, Public Appraisal of Shipping Dedicators for China Shipping 60 Years Anniversary is initiated by SHIPPINGCHINA. COM and is jointly organized by China Shipping and Port Academy, China Communication and Transportation Association (CCTA), China Shipowners Association (CSA), China Association of Port-of-Entry (CAOP) and Dalian Maritime University. The curtain for “China Shipping 60 Years Anniversary Dedicators Selection” has been completely opened in Shanghai in May 2008. After over on year’s preparation, the result will be released tonight. And we will show my gratitude to COSCO group, China Shipping Group, China-Polish Company, China Merchants Group and so on. And I also want to show my gratitude to the support of distinguished senior officials.